SCE Environmental Group can deploy its Cone Penetrometer Testing Rig (CPT) to platform with a state-of-the-art sensor technology and a suite of cone penetrometer (CPT) tools to perform rapid site characterization across the United States. Using fiber-optic technology with LIF, or laser-induced fluorescence provides rapid real-time in situ delineation of subsurface petroleum hydrocarbon contamination down to depths of 150 feet. New laser sources (xenon chloride [XeCl] excimer and microchip quadrupled neodymium/yttrium aluminum garnet [Nd/YAG]) extend the contaminants detected to span the range of petroleum hydrocarbon products. This technology consists of a sensor-tipped penetrometer probe hydraulically advanced with a self-contained data collection and analysis system, housed in our CPT truck. Additional probes incorporate video imaging technology and soil moisture measurements while the latest in CPT sampling devices allows the collection of soil, water, or gas samples for analytical confirmation or other measurements. Two-inch, one-inch, and one-half-inch direct-push wells can be installed using the CPT platform. Using a combination of sensors and tools, our CPT yields significant savings in both time and cost over conventional screening methods.

As the penetrometer probe is pushed into the ground, sensors in its tip detect petroleum hydrocarbons in real-time from their fluorescent response to excitation by ultraviolet light passing to the soil through a sapphire window in the tip of the probe. This fluorescent signal is collected by the probe and carried back up the penetrometer rod to the spectrograph, which disperses the signal. The resulting energy is distributed as a function of wavelength and measured using a linear photodiode array. This information is then computer recorded and compared to a standard curve to provide a measurement of the fluorescent response. The measured response is directly related to the concentration of petroleum products in the soil. To ensure consistent performance, at the beginning and end of each push/pull cycle, the system is calibrated using a laboratory standard. 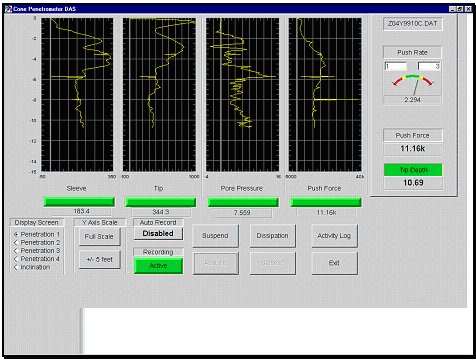 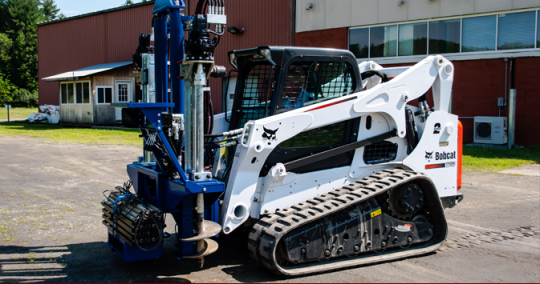 The penetrometer tip is also equipped with sensors to determine the physical characteristics of the soil as the probe penetrates the ground. Strain gauges in the tip provide data about compression and sleeve friction. This information is passed up through the center of the penetrometer rod, computer recorded, and then used in a classification scheme to identify the types of soil encountered by the probe. An alternate laser source extends the range of petroleum hydrocarbon contaminant products for more effective detection of light fuels such as kerosene, jet fuels, and gasoline. Additional sensors that can be used with the CPT system include a video imaging probe and soil moisture probes. Video imaging of soils during a CPT push provides insight into soil dynamics and allows grain size analysis. Soil moisture properties can be measured in the vadose zone using a time-domain reflectometry probe, or in the saturated zone using a piezocone. The piezocone also measures pore pressure dissipation by a static test. Together, video imaging and soil moisture measurement data provide a better estimation of soil transport properties, which is especially important in a risk-based corrective action approach. Other chemical sensor systems are currently under development that will extend the measurement capability of the system to metals, chlorinated solvents, and other volatile and semivolatile organic compounds.